Acclaimed vocalist and songwriter Aimée Allen is known for her lyrical and soulful compositions. She will be joined by Grammy-nominated pianist Toru Dodo, world-renowned bassist Francois Moutin, and innovative in-demand drummer Kush Abadey for a set of poignant original music and jazz standards. The Quantum Entanglements project is about connection, in all its forms. Rich musical terrain will be explored with message and melody in brand new compositions. Compelling harmonies and rhythms to be expected.

If you plan on attending this event in person, please read the “audience notes” tab below. In-person attendees will have access to this performance via Video on Demand on our website after the show.

Upon purchase, you will be brought to a Thank You page where you will find a blue link.

Make sure to check the settings on your device for audio and video.

We are excited to welcome you back into our space. Attendees must wear masks and have their temperatures checked upon arrival. We recommend purchasing tickets ahead of time, as we are currently only accepting cash at the door. Please read our Covid Safety Protocol page for a full list of guidelines. 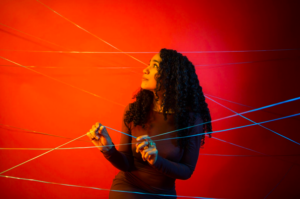 Aimée Allen is a NYC-based jazz vocalist and songwriter who has produced and released multiple critically acclaimed jazz albums that have charted on jazz radio. She has performed extensively in the New York metropolitan area and toured abroad as a headliner in France, Germany, Italy, Switzerland, Austria, Poland, the Czech Republic, Slovakia and Senegal. Audiences have come to know her for her original jazz compositions and evocative lyrics, as well as her innovative arrangements of jazz standards and bossas. Her last release, Wings Uncaged, featured musicians François Moutin, Billy Test, and Kush Abadey, and was named one of Downbeat Magazine’s Best of 2019. It reached #32 on the JazzWeek charts (#1 on the RMR jazz charts, and #8 on the NACC jazz charts). Her original music has been licensed for film and television. She has sung with renowned jazz musicians Romero Lubambo, Ron McClure, François Moutin, Roswell Rudd, Ari Hoenig, Joel Frahm, and Yomo Toro. In 2020, Aimée was the co-writer and interpreter of two songs on Fahir Atakoglu’s jazz release For Love, a collection of Atakoglu’s compositions interpreted by multiple guest artists including Buika, Luciana Souza, and Romero Lubambo among others.  In 2021, Aimée was awarded a South Arts Jazz Road Tours grant to support tour engagements in the U.S.

Kush Abadey – At 16 years old Kush joined the Wallace Roney Quintet, and recorded, traveled, and performed with the band throughout the world.  Kush was the youngest artist to date, ever selected for the Strathmore Artist-in-Residence program for performance and composition.  In 2008,  he was invited to perform for “Jazz at the White House” hosted by Michelle Obama. There he performed in an ensemble led by Paquito D’Rivera featuring Wynton Marsalis.  In 2009, Kush was awarded a Presidential Scholarship to attend Berklee College of Music in Boston Massachusetts, where he studied for two years. While at Berklee he collaborated and studied with musicians such as Terri Lyne Carrington, Ralph Peterson, and Darren Barrett. In 2012, Kush moved to NYC where he currently performs, records, and tours internationally with various renowned musicians and groups.