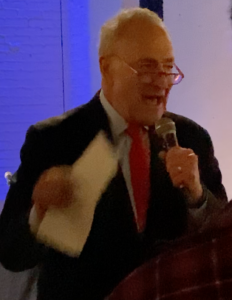 Becoming  Law As Part Of The Covid-19 Relief Bill

Save Our Stages had a tireless champion in New York’s own Senator Chuck Schumer (D-NY) whose support and leadership for this critical legislation helped lead to the $15 billion federal emergency relief grant program that will provide financial assistance to independent venues and promoters that have been devastated by the pandemic’s shutdown.

“Senator Schumer was absolutely indispensable in getting this legislation passed. His unwavering support for Save Our Stages was a crucial factor in our ability to save independent venues, like concert halls, theaters, and other places of entertainment including Broadway, which generate economic activity in our communities, are the cultural lifeblood of New York, and which remain shuttered 11 months into the pandemic,” says NYIVA Co-Chair Jen Lyon.

Sponsored by Sen. John Cornyn (R-TX) and Sen. Amy Klobuchar (D-MN) in the Senate, Rep. Peter Welch (D-VT) and Rep. Roger Williams (R-TX) in the House with 230 bipartisan cosponsors in Congress, the Save Our Stages Act provides a lifeline to federal funding for these locally owned businesses to hold on until it is safe to gather, reopen fully, and once again return to serve as economic engines for their communities. State funding has yet to materialize.

“NYIVA is extremely grateful to Senator Schumer for pushing through the Save Our Stages Act. His efforts promoting the federal program have proven that it is a priority to our Country that we ensure that our collective stages will not remain dark forever.  The Save our Stages Act also provides a great blueprint for state aid.  We are not out of the woods yet! Our members’ businesses are still closed, paying expenses, and will remain so, until it is deemed safe to reopen. We need New York state and New York’s local governments to step up and recognize that we are an industry that brings tremendous value to our communities. We are still looking to Governor Cuomo and our city representatives to provide us additional assistance, which is still necessary” adds NYIVA Co-Chair Justin Kantor.

In NYC alone, live music venues support 25,500 jobs, $722.8 million in wages, and $2.2 billion in economic output with another $400 to $500 million in tourism dollars that can be attributed solely to attending music-related events (source).

Launched in 2020 at the onset of the COVID-19 shutdown Independent music venues in New York formed the New York Independent Venue Association (NYIVA) in affiliation with the National Independent Venue Association to advocate for independent venues and promoters shutters by COVID-19 shutdowns. Independent venues were among the first to close and will be among the last to re-open due to the pandemic. NYIVA continues to advocate to #SaveOurStages as we head into 2021 and beyond. NYIVA is co-chaired by Jen Lyon (Founder of MeanRed Productions)  and Justin Kantor (Co-founder/Managing Member of Le Poisson Rouge, Co-Founder/VP of NIVA). www.nyiva.org

ShapeShifter Lab is a member of NIVA and NYIVA.